If you have a child with an eating disorder, it makes perfect sense for you to feel frustrated and even angry. This is a noted challenge when facing a child who has Anorexia Nervosa (anorexia), when every mealtime can become a battlefield.

But a parent who is feeling frustrated and angry can actually slow treatment down, which is why many therapists practicing Family Based Treatment (FBT) use a technique called “Externalization,” with the purpose of reducing child-focused criticism.

“Externalization of the illness goes a long way towards reducing negative emotions in the parents,” says Renee D. Rienecke, PhD, FAED, Director of the MUSC Friedman Center for Eating Disorders at the Medical University of South Carolina. “We sometimes use the ‘possession model’ in which we talk about the eating disorder as separate from the child. It fits, because many parents feel that something has possessed their child during mealtimes.”

Education also helps to reduce critical thoughts. “We spend time during family-based treatment explaining to parents that their child isn’t doing this for attention or to be difficult,” says Rienecke. “The eating disorder has taken over this area of their life, and it’s not a choice.”

“Our research into Expressed Emotion has led us to put a big emphasis on addressing parental criticism,” says Rienecke. “ We know that if the parents express a lot of criticism, the child will not do as well in treatment.” 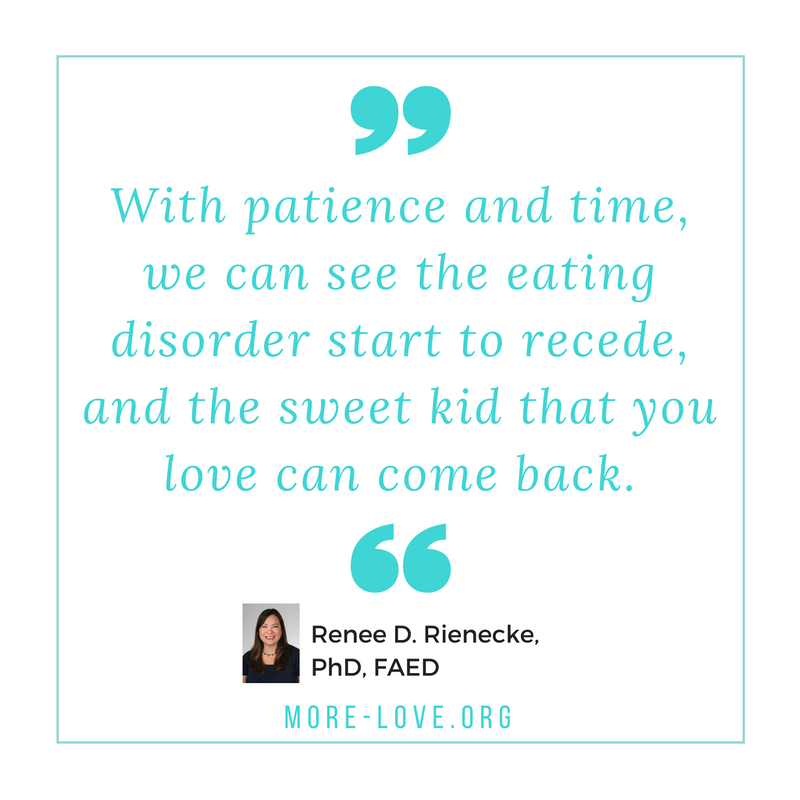 Critical comments are judged based on the content, tone of voice and body language. “It’s not just what you say, it’s how you say it,” says Rienecke.

“One way way to reduce parental criticism is to teach the parents how to focus their anger and frustration on the illness, not the child,” says Rienecke. “Remember that despite how frustrating anorexia can be, the frustration needs to be directed towards the eating disorder, not the child. Being critical of the child hurts treatment and recovery. We work hard to reduce parental criticism not just because it sounds nice, but because it is clinically demonstrated that it works better.”

“It’s important to remember that there is hope for recovery and to maintain your calm,” says Rienecke. “If you get critical, if you get angry, then everyone’s emotions escalate and get out of hand. But with patience and time, we can see the eating disorder start to recede, and the sweet kid that you love can come back.”

Renee D. Rienecke, PhD, FAED, is the Director of the MUSC Friedman Center for Eating Disorders at the Medical University of South Carolina. She earned her Bachelor’s degree at the University of Michigan, her Ph.D. from Northwestern University, and completed her clinical psychology internship and postdoctoral fellowship at the University of Chicago. Her research interests include the role of expressed emotion in treatment outcome for adolescent anorexia nervosa and bulimia nervosa. Website