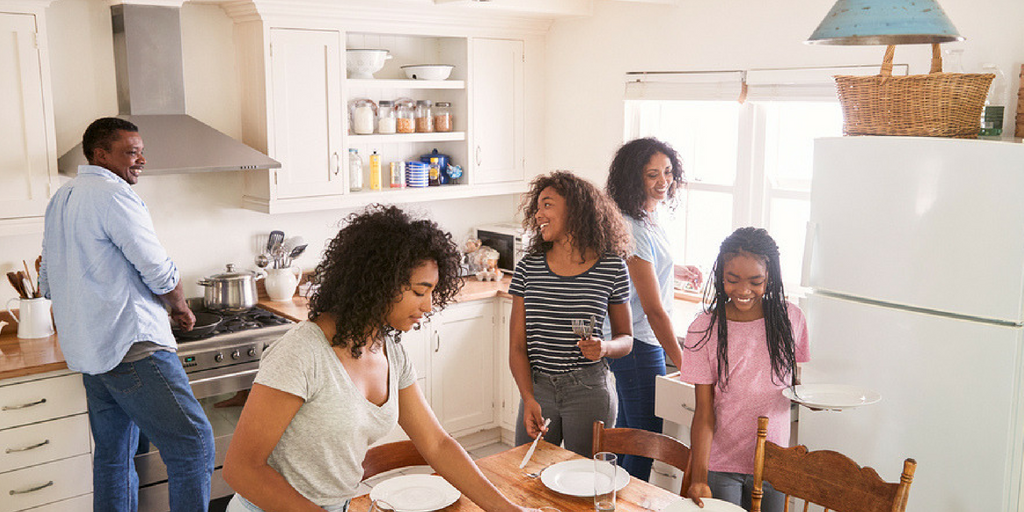 The family dinner table can be a place of safety and love, a place at which everyone is nourished physically and emotionally. And yet, even the kindest families accidentally say these five phrases you should never say if you want to avoid eating disorders. It’s no surprise since we are steeped in diet culture and are determined to ignore the body’s intuition in exchange for weight loss.

Here are the five phrases to never say at the dinner table if you want to prevent eating disorders:

1. How many calories are in this?

Calories have been weaponized by diet culture as a key tool in the pursuit of weight loss, but they are simply a measure of energy, and a very rough one at that. Calorie counting gives dieters a sense of safety that if they follow some arbitrary rules about counting calories, they will get and stay slim. However, weight is not as simple as calories in and calories out. When we talk about calories at the dinner table, we are undermining natural hunger cues. We want our kids to be able to self-regulate and eat when they are hungry and stop when they are full. Artificially controlling food through calorie counting does the opposite.

This statement reveals that you are controlling your diet in order to control your body. That’s called dieting. It’s also a core eating disorder behavior. A healthy relationship with food and your body is rooted in accepting that all foods are acceptable. With the exception of actual allergies, most people can eat all foods without fear. In fact, restricting foods tends to lead to binge eating. Food cravings are a natural part of our body’s communication with us. And ignoring food cravings most often results in a backlash at some point. Diet talk doesn’t belong at the table.

Parents can prevent eating disorders and encourage a healthy relationship with food. To do this, they need to reject the idea that there are good and bad foods. The most common nutritional bad guy right now is sugar, followed closely by carbs. And yet there is no evidence that sugar is “bad.” And carbs are essential to bodies, particularly growing ones. Using the word “bad” for food sets up an inappropriate moral value on food. This can lead to eating disorder behaviors.

4. Are you really going to eat that?

This question is interpreted as the suggestion that a child should not eat that (whatever it is). Parents are responsible for the food that is served. But a child is responsible for the food that goes into their body. Parents should not insert themselves into such a personal choice. When they do, they risk the child’s sense of autonomy and dominion over their own body. Asking a child if they’re going to eat something will come off as criticism. And criticizing a child’s food is a risk factor for eating disorders.

The flip side of insinuating that someone is eating too much is insisting that someone clean their plate. These comments may come from a desire to avoid wastefulness or increase health by eating more vegetables. If parents are following an Intuitive Eating mindset, they can trust that a child is capable of determining when to stop eating. This applies to all foods without prejudice. Living in a diet culture means we are constantly bombarded with messages about ignoring natural hunger cues. But we can help our kids maintain their inborn sense of hunger and fullness by never messing with their sense of when they are “done.”

Born to Eat is a book for parents about eating. Eating is an innate skill that has been overcomplicated by marketing schemes and a dieting culture. It’s time to leave the dieting culture behind for the whole family. It starts with the baby’s first bite! Learn more by following the authors on Instagram.

Leslie Schilling, MA, RDN is a nationally recognized registered dietitian & nutrition expert. She’s been featured in Women’s Health, BuzzFeed, Yahoo News, the Huffington Post, USNews, and on HGTV. Leslie is a self-proclaimed anti-diet dietitian who teaches health through self-care and pleasurable eating. When she’s not cooking with her family, she’s likely shopping for ingredients near her home in Las Vegas, Nevada.

Wendy Jo Peterson, MS, RDN is a registered dietitian and culinary nutritionist. She is the coauthor of The Mediterranean Diet Cookbook For Dummies and Adrenal Fatigue For Dummies. As with all military spouses, she wears many hats, but her favorite is her role as a mama. She splits her time between Austin, Texas; San Diego, California; and Europe.