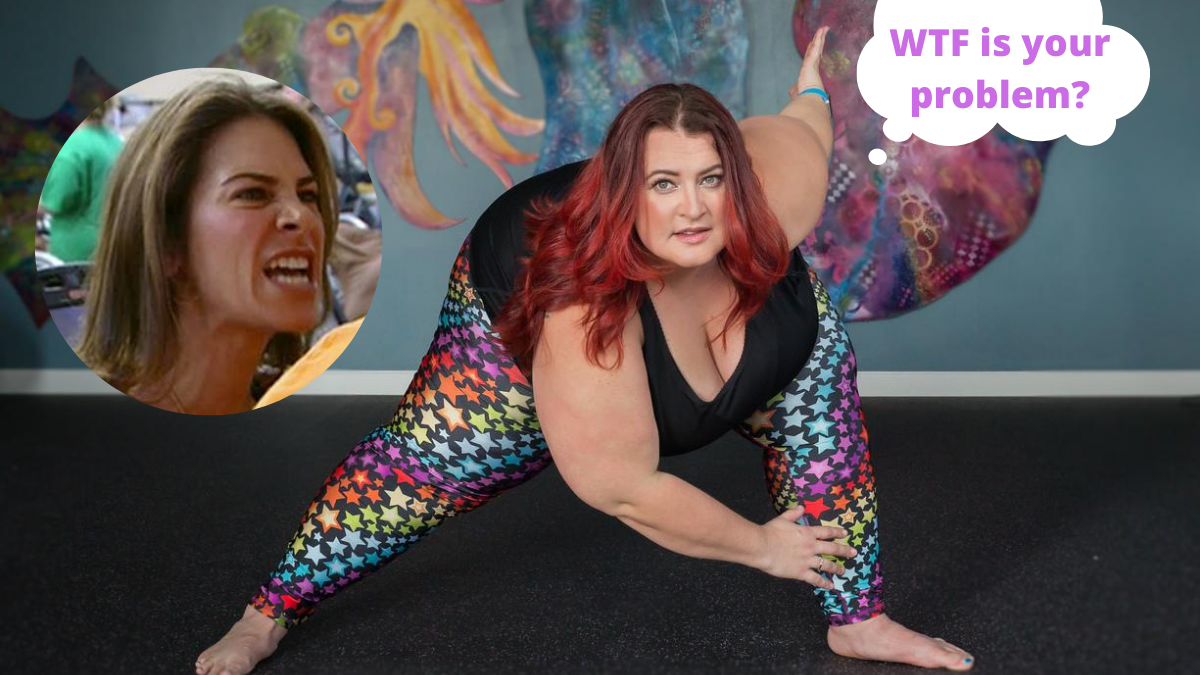 It’s rare to encounter entertainment in our society that doesn’t include weight stigma. Most books, blogs, articles, social media, TV shows, and movies are filled with weight stigma.

Weight stigma: bias or discriminatory behaviors targeted at individuals because of their weight.

Weight stigma is weaponized in the media through language and images. Firstly, weight stigma assumes that fat is deadly and a drain on society. It promotes weight loss at any cost, including negative physical and mental health outcomes. Moreover, weight stigma suggests that low weight is possible for every body. The result is public fatphobia and weight shaming.

Weight stigma is discriminatory and unjust. There are many reasons some people weigh more than others. And intentional weight loss has negative health outcomes most of the time. It is misguided and ignorant to use shame in an attempt to improve health.

And weight stigma is a cultural phenomenon perpetuated everywhere in the media and society. Weight stigma in entertainment hurts everyone.

These are some really obvious examples of weight stigma in entertainment. But they are so ubiquitous that we often don’t even notice. For example:

Most protagonists are either already thin or pursue the thin ideal. Characters make passive-aggressive comments about fat people, bemoan being fat, and strive for weight loss.

These often center “weight loss journeys” that glorify restrictive, disordered eating and over-exercise. The author begins with the premise that their weight is in their control. They are usually ashamed that it has gotten so high. The memoir may say that the message is one of self-love. But the true message is that weight loss is necessary, possible, and beneficial.

This category includes weight-loss books, which are obvious perpetrators of weight stigma. But recipe, wellness, mindfulness, and all sorts of other books feature weight stigmatizing examples and stories. Most wellness books repeatedly use high weight as a symptom of poor self-love or low self-control. The concept is that if you improve your self-love and self-control, you will lose weight. This is rarely true.

It’s impossible to guess how many millions of “before and after” posts have been “liked” on social media. Before and after photos are inherently weight stigmatizing. This is true even when the stated goal is emotional and physical health. Social media is also a major promoter of disordered diet trends and unproven “health hacks.”

Thin people are positioned as healthier, more successful, more likable, and more likely to find love. Fat people rarely appear, and when they do it is often for comic relief or as a cautionary tale. Or fat people are used for motivation – as in the movie Brittany Runs a Marathon. In these examples, a fat person loses weight and become a thin, successful, happier person.

How I Met Your Mother (TV show)

This sitcom ran from 2005-2014 and is still going strong on streaming services. It features weight stigmatizing comments at least once per episode, and there are 208 episodes altogether. Therefore, it is a clear example of weight stigma in entertainment.

I enjoy this show. But I insist upon calling out weight stigma whenever I see it, and this show is particularly bad. My daughter holds the remote when we watch this show. She automatically pauses it in troublesome spots so we can discuss weight stigma when it (frequently) comes up.

Marshall: He’s rich? Please tell me he wrote you a big, fat check. A check so fat, it doesn’t take its shirt off when it goes swimming.

Barney: That is a big, fat check. A check so fat, after you have sex with it, you don’t tell your buddies about it.

Robin: A check so fat, when it sits next to you on an airplane, you ask yourself if it should have bought two seats.

Barney: […] why can’t there be a day for those who are single and like it that way?

Marshall: Now you just sound like a fat girl at Valentine’s Day.

Barney: Let’s say the young lady you’re bringing home is dressed for winter. Under those layers, an unwelcome surprise could await you. The scale with body fat calculator I’ve hidden under the welcome mat makes sure you never have banger’s remorse.

Michaels was a trainer on the competition reality TV show The Biggest Loser. The show is one of the biggest perpetrators of weight stigma. Known for her brutal “tough love” training methods, she often brought people to tears with her abuse. She directed her verbal abuse at their bodies, their values, and their characters. It was unacceptable. Former contestants have reported that they experienced physical and emotional trauma during the show.

The National Institutes of Health found that all but one of 14 contestants had regained most of the weight they lost. But worse, their metabolic rates had slowed drastically, possibly for life. Health improvement is the main justification for weight loss. But a slower metabolism is not a health improvement by any measure. This study is a cornerstone in the research showing that intentional weight loss is worse for health than weight itself.

Michaels launched a business empire based on her dubious reputation on The Biggest Loser. She is the definition of weight stigma being used for entertainment and profit. Her products include a fitness app, 20 DVDs, nine books, and a podcast. She has countless opportunities to spread her message of body hatred. Recently she has been criticized for blatant weight stigmatizing comments, including:

“There was so much fat-shaming for such a long time that now the pendulum has swung to a place where it’s like, ‘You are 250 pounds and you’re owning it! Go!’ And I’m like, wait wait wait, no no no… When you start to celebrate that… it’s not about shaming, it’s not about excluding anyone, but we also don’t want to co-sign cancer, heart disease, diabetes.” – Jillian Michaels on The Wendy Williams Show

The facts of weight & weight loss

It’s possible that you read Jillian Michaels’ comments and agree with her … at least a little bit. But that’s a symptom of living in our society. Those beliefs are not based on scientific facts. Here are the facts about weight and weight loss:

1. Weight is mostly genetic and environmental. In fact, very little of our weight is under our individual control.

4. Weight stigma and intentional weight loss are the real health problems. They foster eating disorders and create most of the health conditions associated with higher weights. Medical professionals have high rates of weight stigma. This increases the likelihood that people in larger bodies will receive suboptimal care.

Body weight is not as simple as how much people eat and exercise. It’s a complex combination of genetics and environment. Furthermore, it’s virtually impossible to reduce body weight. Intentional weight loss fails 95% of the time and results in weight gain 65% of the time. Therefore, the premises underlying weight stigma are false.

The scientific truth about body weight

These facts go against everything we think we know about food and weight. And yet they are scientifically true. Our scientific library contains the data behind these facts. You can also read about them in these excellent pro-health, anti-diet books:

Jillian Michaels is correct that it’s no longer socially acceptable to openly deride or criticize people for their weight. Instead, people engage in “concern trolling.”

People think they can conceal hatred, disgust, anger, and shame by focusing on “health.” For example:

These statements are just a politically correct way to say that being fat is unacceptable. The implication is that the person chooses to be fat and can prevent being fat. And, of course, these statements are based on the false assumption that fat is deadly. It’s not. In fact, there is evidence that people who weigh more are actually healthier.

Some people ardently believe that it’s fine to accept your body … unless it’s fat. They say that in those cases, people should lose weight. This is scientifically ignorant and cruel. As a result, any “concern” they share is just shame. They wrap shame up in a package that doesn’t make them feel like total jerks. But they are, in fact, jerks.

The shame of weight stigma

Some people have lost weight in the short term and want to tell anyone who will listen how they did it. One of their strategies for maintaining their weight loss is believing that weight is within their power. But only 5% of people maintain intentional weight loss. And 65% end up weighing more.

Weight stigma’s main tool is shame. And shame is cruel, discriminatory, and unacceptable. There is no time in which shame is an effective path to health. Shame is absolutely and unequivocally anti-health.

Weight stigma uses shame in an attempt to control individual’s bodies. Our society weaves weight stigma into entertainment. It’s so common that we often don’t recognize weight stigma for what it is. It takes time, education, and practice to overcome weight stigma. But it is possible.

1 thought on “Weight stigma in entertainment and society”