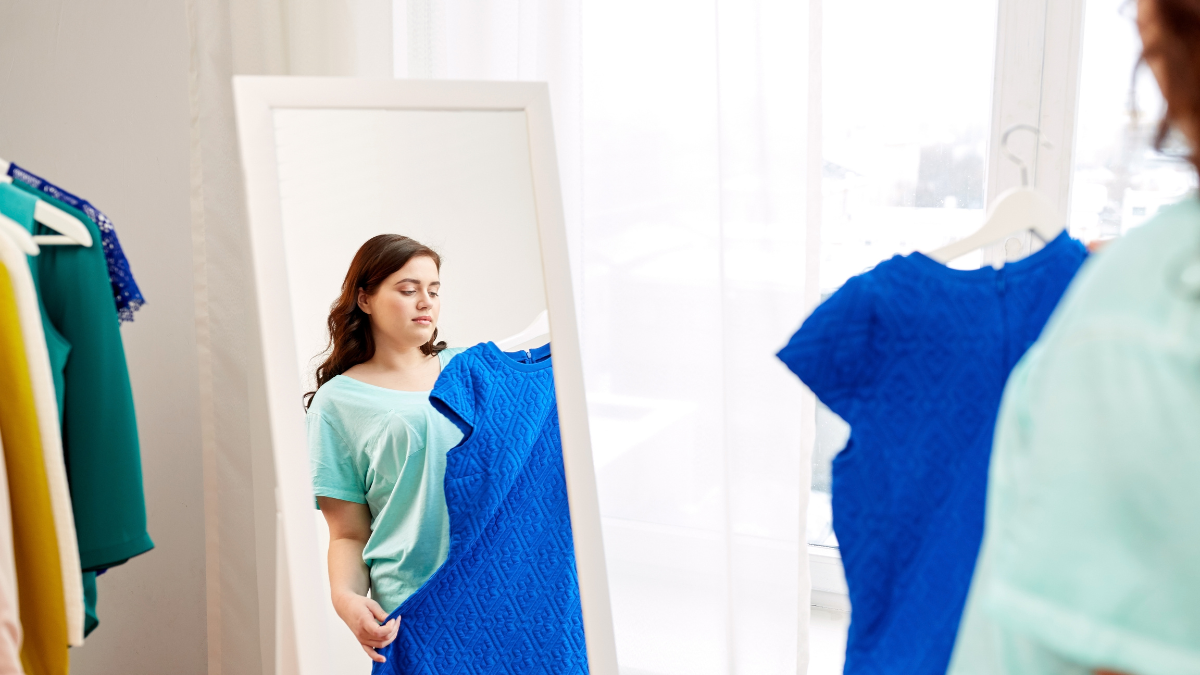 Eric has noticed that his child Mackenzie feels a lot of body shame. “It started with a few comments here and there,” he says. “But now she is constantly talking about how terrible her body is. She compares her body to everyone else’s and spends hours looking at herself in the mirror, pinching and criticizing herself.”

Eric is not alone. Unfortunately, body shame is a common side effect of living in our culture. We have the perfect conditions for kids, particularly female and nonbinary kids, to feel self-conscious about how their bodies look.

While many parents assume this is normal and a passing phase, Eric has good reason to be worried. Body shame is linked to low self-worth. It is a precursor to many mental disorders, including anxiety, depression, substance abuse, and eating disorders. While we can say that body shame is normal in our society, it is definitely not healthy. And parents can and should intervene to support their kids’ lifetime health and wellness.

What is body shame?

Shame is a feeling that your whole self is wrong, not related to a specific behavior or event. When a person has body shame, it means they believe their body is intrinsically, essentially wrong and bad. They may attempt to make themselves feel better by manipulating their appearance. But it doesn’t work because body shame runs much deeper than appearance.

1. Understand our society and culture

Our society and culture are cruel to bodies. Bodies are constantly criticized, dominated, and treated as subservient to our brains. In our culture we worship at the altar of diet culture. This says that bodies should be thin, and that not-thin bodies must be controlled with diet and exercise. Diet culture also says that people who are not thin are less intelligent, beautiful, and worthy of time, attention, and love.

There is zero evidence of success in maintaining weight loss following a diet. And there is substantial evidence that dieting predicts weight gain. Yet the U.S. weight loss market reached a record $78 billion in 2019. Meanwhile, eating disorders are skyrocketing. And it’s no surprise: diet programs are basically how-to manuals for eating disorders.

⭐ If your child feels body shame, you need to understand the cultural context. Body shame is baked into our society. Parents must consciously and intentionally counteract society’s discrimination against and domination of bodies. Parents also need to monitor social media use. They should limit overall time and reduce the number of body-toxic accounts that kids follow.

Family cultures that assume that thin bodies are better than fat bodies cause significant harm to kids’ body image and lifelong health. This can be done actively, by telling kids that thin people are healthier and smarter than fat people. It can also be done passively, by never counteracting the societal messages that say those things.

3. Understand the link between body image and self-image

Two things are true. First, body image is a reflection of self-image. And second, self-image is often directly tied to body image due to our body-negative culture. Therefore, we simply cannot separate a child’s body image from their self-image, and vice versa. A child who feels shame about their body also feels shame about who they are as a person. Because our body is our physical manifestation of our personhood.

⭐ If your child feels body shame, then remember that it’s not only about their body. Body image is directly linked to self-image, and the two cannot be extricated from each other. Don’t assume that you can “fix” body image without going deeper and addressing self-image and self-worth. Body image isn’t ever fixed by working on outside appearance. It will not be improved with a diet, weight loss, or exercise program. A fitness class or personal trainer can only superficially improve your child’s body image. Body image is an inside job. If necessary, get your child a non-diet therapist, coach, or counselor who can help them develop a healthy sense of self.

4. Change how you talk about bodies

Because we live in a body-negative culture, most people speak poorly of bodies. We were raised in these conditions and will unconsciously perpetuate them unless we actively work to overcome toxic patterns. Speaking as if weight is a moral responsibility, as if weight is within people’s control, and as if weight is directly linked to how much a person eats and exercises is harmful. This sort of language encourages eating disorder behavior and body shame. It also encourages discriminatory and incorrect beliefs about larger people.

Learn why a non-diet approach to health is the healthiest. Find out why weight is largely out of individual control. And why it’s better for our health never to diet than to attempt to change our weight on purpose. Next, change your language about bodies. Remember that body image and self-image are the same things. And never speak about another person as if their body is an object to be manipulated. The body is an essential part of each person’s existence as a human being. All bodies deserve to be spoken of with dignity and respect.

We live in a body-toxic culture. If I could change the culture, I would. But since cultural change starts at home, let’s focus on our families and the people we love. Learn to talk about bodies with respect. Stop dieting and trying to control bodies. And actively counteract our society’s harmful messages about bodies to help your child stop feeling ashamed of themselves. Your actions really make a difference!