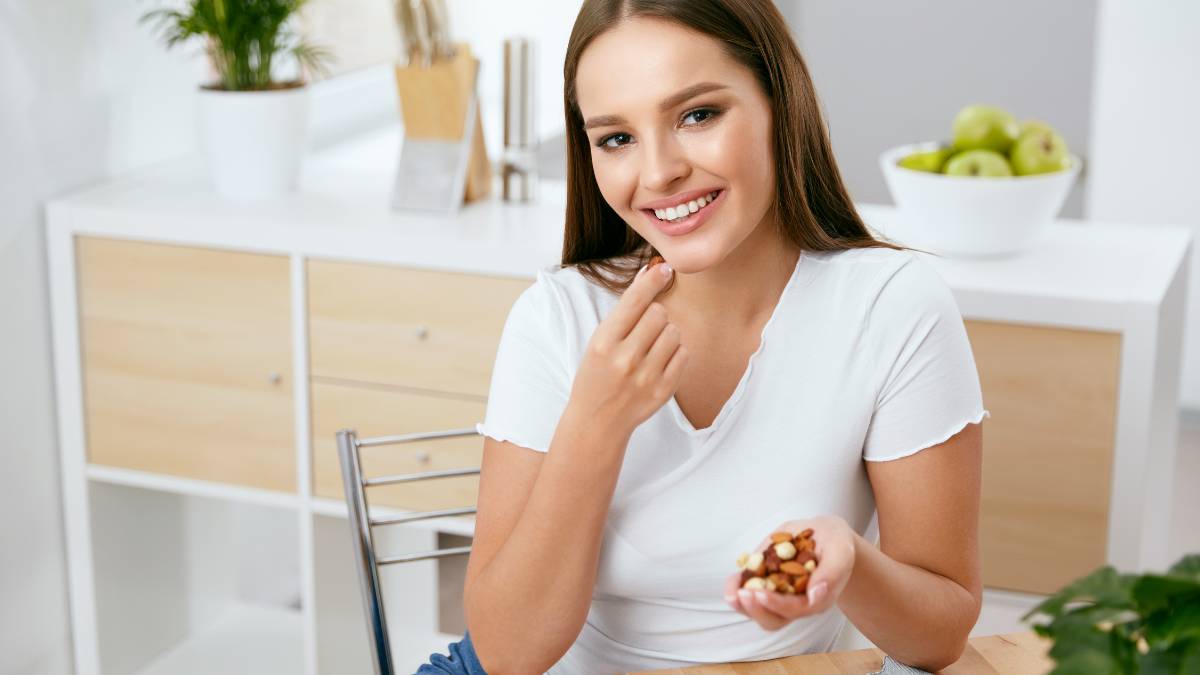 The recent TikTok trend of calling out mothers for being “almond moms” brings up the obvious question: are almond moms related to eating disorders? The answer is nuanced.

The almond mom trend blew up on TikTok in late 2022. It’s primarily driven by teens and young women posting videos that mock their moms for diet behavior like undereating and overexercising. These posts parody the mothers as being stuck in diet culture. The mothers are presented as being rigid and ridiculous in their own weight control behavior. They also blame these mothers for inflicting diet culture on their daughters, even causing disordered eating and eating disorders.

Is an almond mom helpful or harmful?

In the TikTok videos, an almond mom is presented as being silly, harmful, and sometimes traumatic. Almond moms are shown using classic diet behavior that were actively taught to girls and women in the 1990s, like cutting food into tiny bites, ignoring cravings, substituting desired food for less-palatable low-calorie food, ignoring hunger cues, counting calories/points, and believing that being in a small body is essential.

In the parodies these moms are passing these diet culture beliefs onto their kids. They teach their kids diet behaviors and restrict the food available in the home (e.g. no junk food). Almond moms also critique their kids’ hunger and appetite.

Can almond mom behaviors be linked to kids’ eating disorders?

As biopsychosocial disorders, eating disorders are highly responsive to the home culture. So yes, almond moms may be linked to eating disorders, but it’s not a simple cause and effect. Eating disorders affect about 10% of the population. But I estimate that almond parent (diet) behavior is present in at least 80% of American households.

Do almond moms have eating disorders?

Many almond moms may be women with disordered eating and/or an unrecognized/undertreated eating disorder. Remember, moms today were raised in a highly body-toxic environment that actively taught girls and women to adopt diet culture. Women are both the primary target of the ~$80 billion diet industry and are mocked and vilified when they follow its rules. Ouch.

Surveys have identified disordered eating behaviors among at least three out of four American women. In 2013–2016, 49.1% of U.S. adults tried to lose weight in the last 12 months. All weight loss efforts utilize eating disorder behaviors, and intentional weight loss is a significant risk factor for developing an eating disorder.

Many adult women have active eating disorders that have never been identified or treated because they follow what the diet industry calls a “healthy lifestyle.” It is effortless for eating disorders to fly under the radar in our body-toxic diet culture.

It is impossible to diagnose strangers on the Internet, but I think we can have compassion for women being called almond moms because they may be living with some form of disordered eating, if not full eating disorders.

My opinion on the almond mom trend

I think the almond mom trend exposes a dangerous thing that we know is common in homes. It’s a conversation we must have. However, I don’t think publicly shaming women is a helpful way to resolve the pernicious nature of diet culture.

The fact is that when parents are stuck in diet culture, their kids are at higher risk of eating disorders. So I think we need to have more conversations about how parents’ attitudes towards food and weight issues need to change.

At the same time, I’ve seen some really upsetting TikTok videos in which “almond moms” are filmed without their knowledge and mocked for their disordered behaviors while eating. I’m absolutely not a fan of public shaming or invasions of privacy, especially when it comes to something as personal and fraught as a woman eating.

If you’re an almond mom

If you think you might be an almond mom, thank you for being vulnerable to notice that! It’s hard to look at ourselves in a negative light. If you have been accused of being an almond mom, I’m sorry. It’s not nice to be called names.

Either way, being an almond mom is a call to action. I invite you to explore your beliefs and behaviors about eating, exercise, and weight. Diet culture is virtually invisible when we’re stuck inside its tangled web. I know – I’ve been there! But it’s essential that you do the work to uncover diet culture beliefs and heal from your harmful behaviors, for your kids’ sake and your own.

Here are some steps to get started:

While I don’t like the method, I think the almond mom trend on TikTok has a lot to teach parents everywhere. Our kids are watching us all the time, and they are affected by our beliefs about weight, eating, and exercise. If you think you might have an eating disorder, please reach out for help and support. You deserve it!