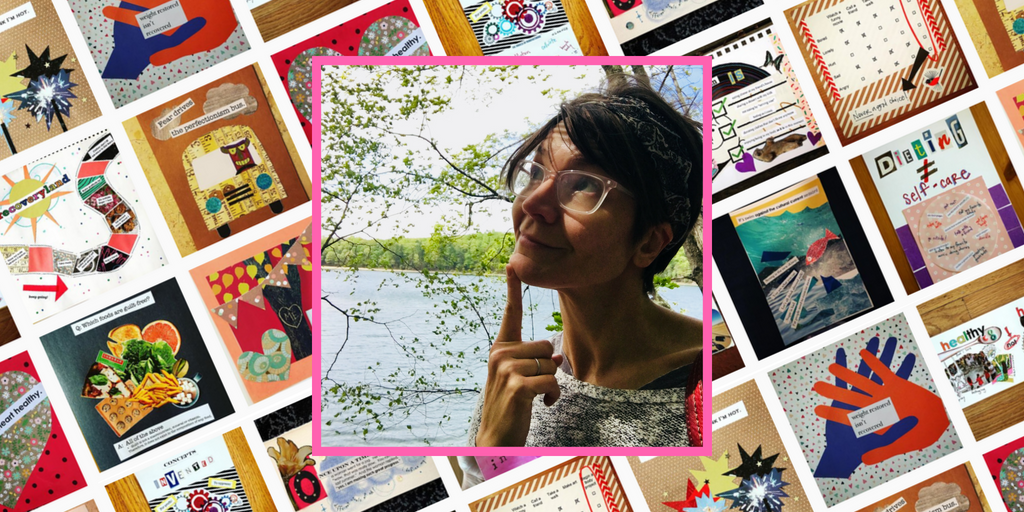 I was raised in a home where there seemed to exist a great deal of permission around food.  There was a large variety of food available in our pantry and refrigerator. Friends would flock to our house to eat “sugary” cereal and “junk” food.  In addition, appealing, balanced meals were served on a predictable schedule.

However, my mother was at times on a diet or “watching it.”  When she plated our dinners, she served herself noticeably less food than the rest of us. At lunch, she would sometimes eat “diet” food typical of the 80s: grapefruit, cottage cheese, canned tuna, rye krisp crackers and diet shakes.  One of my older sisters would also diet from time to time. It was not discouraged. My father ate pretty erratically and, after dinner, would spend a lot of time eating snacks while standing in front of our pantry. He had a larger body and believed strongly in fasting.

So there was this idea that young children had permission to be normal eaters and to just exist in their bodies but all bets were off for adults. They needed to control what they ate.

The summer before I began high school, I experienced my first episode of depression and, for the first time, experienced a significant loss of appetite. It felt like a funny blessing…this state, this apathy toward eating, that my family members had been trying to achieve just sort of fell into my lap.  So, I began to hone it by “healthying up” my diet. At the same time, my depressive symptoms began to lift as I became more engrossed in my restriction.

As my weight changed, my size became an important part of my self-esteem. I was becoming a skinny girl! This was something new I could be good at!

My family was not overly concerned. I think that my parents normalized my restrictive behavior as a “phase girls go through” or just normal initiation into womanhood. In my family, as in many, a slender body was admirable and preferred.

My body continued to noticeably change and it became my primary focus. It was apparent to the few friends I had that I was not just dieting. I became reluctant to socialize because I did not want to be pressured to eat or for my behaviors around food to be scrutinized. I grew more irritable and sensitive. I needed my behaviors; I relied on them to assure me of my attractiveness, likeability, and success, essentially my worth as a person. They defined me.

My days became a series of rigid eating and exercise rituals. My skills, passions, and dreams dwindled in favor of my behaviors. My parents vacillated between denial and alarm. My father insisted that I was merely “athletic” and had remarked that it was better for me “to be underweight than the alternative.”  My mother, on the other hand, expressed genuine concern over my body, which was now “clinically” anorexic. She took me to the pediatrician who was dismissive.

On the one hand, I felt that I had safely slipped under the radar. Another part of me, however, desperately wanted someone else to take over and rescue me.

The August following my freshman year in high school, I reached my lowest weight. It was a number much lower than I had ever anticipated reaching. On the one hand, I felt a rush and, on the other, I was terrified by how far this had gone.

My sister confronted me about my behaviors as well as the state of my health. She comforted and reassured me, and she talked with my mom about my eating disorder since I was not ready to do so. Later that month, I began outpatient therapy and nutritional counseling.

Over the course of this initial recovery period, my mother accompanied me to a weekly eating disorders support and psycho-education group for several weeks.  She even took me to listen to a lecture by Joan Jacobs Brumberg.

My family always supported my eating during recovery. However, I wish my parents knew that fatphobia, which continued in our family, was a huge barrier to recovery.

During this recovery period, I began to binge. Biologically and psychologically, this made some real sense. My body and brain were starved. My family, therapist, and dietician were overjoyed that I was eating again. However, I was still trapped by my feelings about weight and food.

I wish my parents had known that an eating disorder was more than a weight-based illness.  After I reached my “target weight,” my treatment stopped. My underlying anxiety and depression were never recognized or treated.

For the next several years, my weight fluctuated greatly and much of my eating remained compulsive albeit at a less severe level. What remained constant and unresolved was the sense that I was deprived and could never get enough. The eating disorder served a larger purpose in my life and now there was a void.

While away at college, I yearned to be “normal.” I hoped to recover the untainted relationships I once had with my body and food before the onset of my disorder. I started a recovery group, and we all believed the solution to our problems lay in being able to change how we viewed and used food or how we felt about our bodies. What we didn’t consider was the why in the equation. Why did we maintain our behaviors? How did they serve us and what did they represent?

During my senior year of college, I sought the help of a therapist and a dietician again. I was no longer clinically ill but I still didn’t exactly feel comfortable in my own skin and eating would, at times, cause me to feel guilt, shame or self-reproach. This period of therapy gave me more stability, and I went on to complete a Masters degree in Social Work.

My first year out of graduate school, I suffered from my second episode of depression. With the help of a psychiatrist over a period of several years, I started to understand more of the “why” in my eating disorder. I discovered that I used my behaviors to manage my depression, stress, and anxiety. When circumstances or emotions became seemingly unmanageable, my eating disorder provided constancy and refuge.

Through therapy, I slowly started to see myself as much more than a jumble of pathology and failures. I came to witness my strength, competence, and value as a human being. I started to trust myself again.

I stayed well through the pregnancies and births of my two children. When my son was diagnosed with autism, I felt terrified, powerless and as though I had failed in life. Once again, I slipped back into some of my old behaviors. I channeled all of my pain and exhaustion into destructive eating patterns. This went on for about 6 months when I began to see a psychologist and registered dietitian that specialized in eating disorders.

They encouraged me to uncover my faulty thinking and challenge it. They helped me to find my voice again, to state my needs, to ask for help and establish my boundaries.  Mostly, they taught me the incredible value of self-care. I cannot nourish and nurture others if my own well is depleted.

I used to imagine how things might have been different for me if my family was different, if I weren’t so driven or if I wasn’t a woman.  As I began to understand myself more clearly, I accepted that the development of the eating disorder was part of my life history. It is a mental illness that I work to keep in remission. I don’t blame myself for its having existed much like one would not blame oneself for having had cancer or asthma.

In the beginning, the function of the eating disorder was to comfort and soothe myself. It relieved a lot of the stress and anxiety in my life. For me, the eating disorder was a compass giving me direction while bypassing the difficulties of the present. It also gave me a false sense of success. My behaviors became my automatic “go-to” anytime I experienced a difficult emotion and needed to retreat. They were coping mechanisms.

For a long time, I strove to be “cured” because I was so ashamed of ever having had an eating disorder. Learning to see recovery as a process and treat myself more gently and less critically has helped me maintain forward momentum.

The loving support of my husband, my family, and my very closest friends truly help me to remain grounded.  My two children are my main reason to be well. I strive to have energy and a love of life that I can share with them. I have discovered joyful movement in a variety of way: walks, yoga, swimming, dancing and lifting weights. I do not abide by any exercise routine or schedule, though.  I fully embrace intuitive eating. I take medication to treat my mood disorder and I still see a psychiatrist and therapist in addition to my general practitioner. I also make a lot of irreverent and fun artwork.

As a parent, I feel it’s important to eat with your children and enjoy the same foods together.  So my kids see me eating pizza, ice cream, hamburgers, etc. I follow the Ellyn Satter philosophy on eating: parents decide what is served at a meal and the time of the meal while the individual child determines what and how much of each food they will eat.  We also talk about how bodies change as we get older and we all grow at different rates and have unique bodies. One of my favorite books to read is “Amanda’s Big Dream.”

Recovery for me is about trying my best to stay truly engaged in life, all the while learning more about myself. 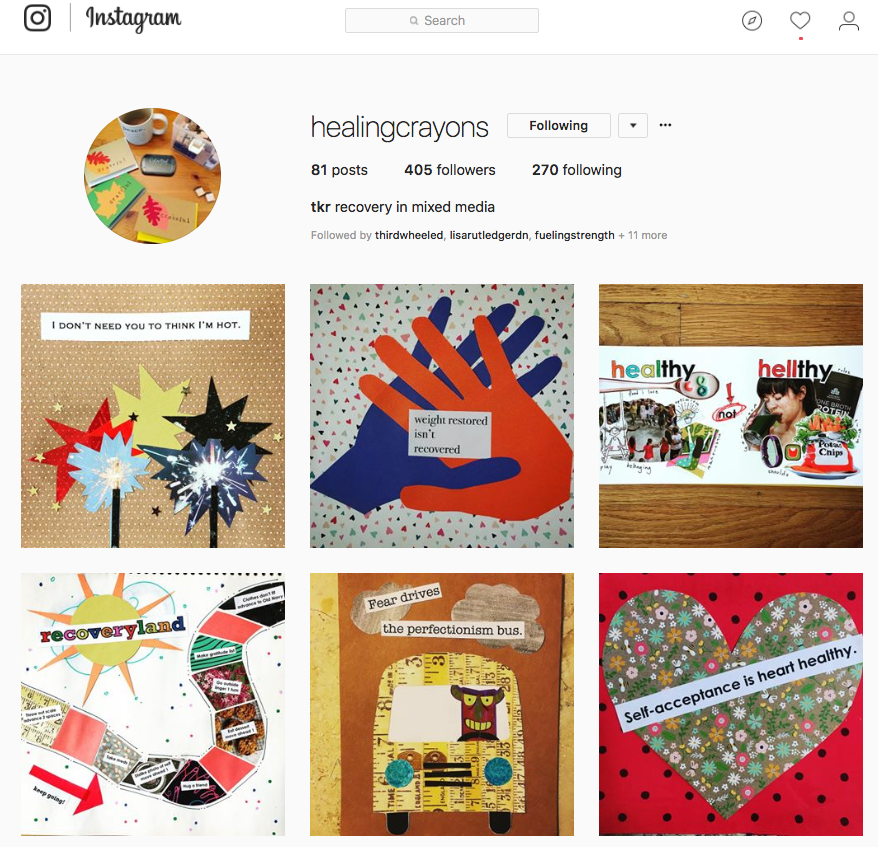