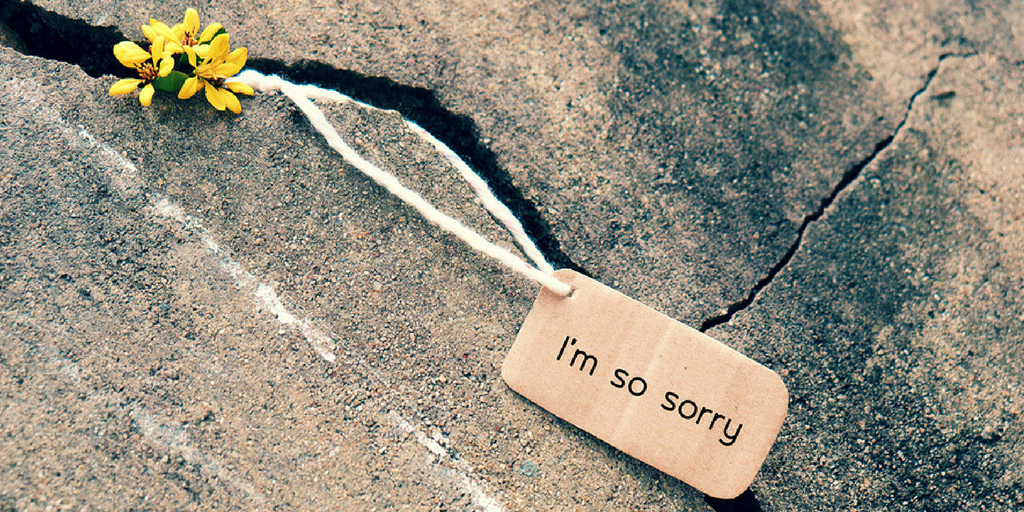 Hector is confused. He was raised to respect and honor his father without question, but that approach hasn’t worked out with his son Diego. “I was always respectful of my dad, and I tried to emulate the same parenting approach with Diego, but things are definitely not going well right now,” he says.

Diego has an eating disorder, and he’s really angry with his dad in particular. “According to Diego, I’ve been too harsh with him and haven’t given him space to develop his own identity,” says Hector. “I can actually relate to his feelings. I hated my dad when I was a teenager. I’m pretty upset that I’m doing the same thing to Diego, but I don’t know what else to do.”

Hector comes from a long line of strong, silent men who rule their sons stoically. There is no history of parents apologizing to children in Hector’s family.

“Most of all, I’m worried that if I apologize for what I did wrong, it somehow lets him off the hook,” says Hector. “Is apologizing the same thing as taking responsibility for the eating disorder? Because that’s not right. I didn’t cause it, and I know that. But if apologizing will help Diego recover from his eating disorder, I’m willing to try anything.”

Hector is worried that apologizing is the same thing as accepting guilt for the eating disorder. This is a common misunderstanding about apologies. But apologizing to our kids about the mistakes we made, which are almost always accidental and based on how we ourselves were parented, shows kids that we can take responsibility for things even when we didn’t do them on purpose or even consciously.

When we practice apologizing to our kids, we are not showing weakness or accepting responsibility for something like an eating disorder. We are modeling good relationship skills, which involve a process called rupture and repair.

The best analogy for this is when we lift weights at the gym. Lifting weights creates microscopic tears in our muscles. As they repeatedly tear and heal, our muscles get stronger.

Just like muscles, relationships benefit from rupture and repair. We don’t need to be afraid that when we have made a mistake, we’ve ruined the relationship. Many times, particularly with kids, making a mistake is an opportunity to model the value of a good apology. When you apologize and repair the relationship as soon as possible, each “sorry” can strengthen your relationship with your child.

Of course, finding the right approach to saying “sorry” takes practice, and it can seem even more difficult when in the parent-child relationship. Most of us have not practiced saying “sorry” to our kids. And few of us had parents who said “sorry” to us.

Luckily, it’s never too late to learn to say sorry. Apologies strengthen our relationship with our kids and can make them feel a whole lot better about themselves and us.

But don’t worry if you’re bad at it at first or feel awkward. Just like anything, learning how to say sorry is something that takes practice. You don’t have to get it perfect to make a difference. Like riding a bike, you may do it badly for a while, but over time it will become second nature. Just start trying!

Why apologizing helps with eating disorders

When a child has an eating disorder, they typically have trouble processing their emotions and accepting themselves. While their eating disorders may stem from many places, often parents are first in the line of attack and blame.

This is not because parents deserve the blame. It’s because children need a place to target their feelings of anger and frustration, and parents are typically a safe target. Getting angry at parents is an easy and safe way for kids to begin to process their feelings adaptively.

This is why learning to say sorry to our children can help deepen our connection with them and soften their feelings towards themselves and us in the process.

The thing to know is that most children, consciously or unconsciously, think that their parent’s mistakes are their own fault somehow. Kids may outwardly point fingers at their parents and blame them when things go badly, but inside they are usually blaming and criticizing themselves. When apologizing to your child, you’re not accepting blame for their eating disorder, but you are accepting responsibility for the times when your parenting missed the mark.

When we give our kids an apology (good or bad), they may:

You can’t plan on your child’s response to your apology. You can make the best apology in the world and they still may respond badly. But that’s OK. The point of an apology is to give it with zero strings attached. As soon as you expect or ask for a certain outcome, you jeopardize your ability to be authentic and wholehearted.

When you apologize to a child, you must ask for nothing in return. Whatever your child’s response, the important part is that you offered a meaningful apology for something you did wrong. Your child’s response may be helpful in shaping your next apology, but if they don’t respond by thanking you and saying “I forgive you,” it doesn’t mean you’re doing it wrong. Keep trying!

Elements of a good apology:

What not to include in a good apology:

“Sam, I realize that when you gained weight in puberty, I put you on a diet. At the time, I thought that I was helping you. But that doesn’t excuse the fact that it was the wrong thing to do. I should never have done that. I’m so sorry.”

“Alex, I’ve been thinking a lot about how we used to tease you about your appetite. It was wrong. I should never have done that to you, and I’m really sorry about it.”

“Jo, I can see that your father and I have pushed you pretty hard to excel at cross-country. When you first started, you really enjoyed it, so I guess we just got really excited and pushed for you to be the best. We thought we were doing it for you, but in hindsight, we can see that it became more about our passion than yours. We should have paid better attention and listened to you when you tried to tell us you were struggling. I’m so sorry that didn’t listen, and we’re going to work really hard on that from now on.”

Before you approach discussions about your parenting mistakes, please be gentle with yourself. It will be hard for you to give a good apology if you’re feeling ashamed of yourself and in need of forgiveness. Remember that you are not responsible for causing your child’s eating disorder. You are only responsible for recognizing your mistakes and apologizing for them.

We all make mistakes! Parenting does not require perfection to be good enough!

If you give yourself self-compassion before you give your child an apology, it’s much more likely to succeed because then your apology will come without strings attached.

After thinking about it, Hector decides to address one of Diego’s main complaints. “He says that I always shut him down when he talks,” says Hector. “And I know I do that. I guess I always thought I needed to be in control, but now I see that shutting him down really hurt him, and I can remember feeling that way when I was his age.”

Armed with self-compassion and the model for a good apology, Hector approaches Diego. “Diego, I realize that when you told me that I always interrupt you, I immediately got defensive. I think I literally interrupted you and said, “No, I don’t!” when you tried to talk to me about it. I don’t have much experience with this, but I want to be closer to you and get better. So I want you to know that I’m sorry for interrupting you and getting defensive, and I will work on that.”

Diego shrugged, pulled his hoodie up to hide his face, and said, “whatever” while walking away.

While not exactly a Hallmark Movie moment, this was a big success for Hector, and it was his first time apologizing to his son. Over time, he brought up a few other apologies, and gradually Diego started talking to his dad about how he felt. Their relationship got closer as they shared more openly with each other.