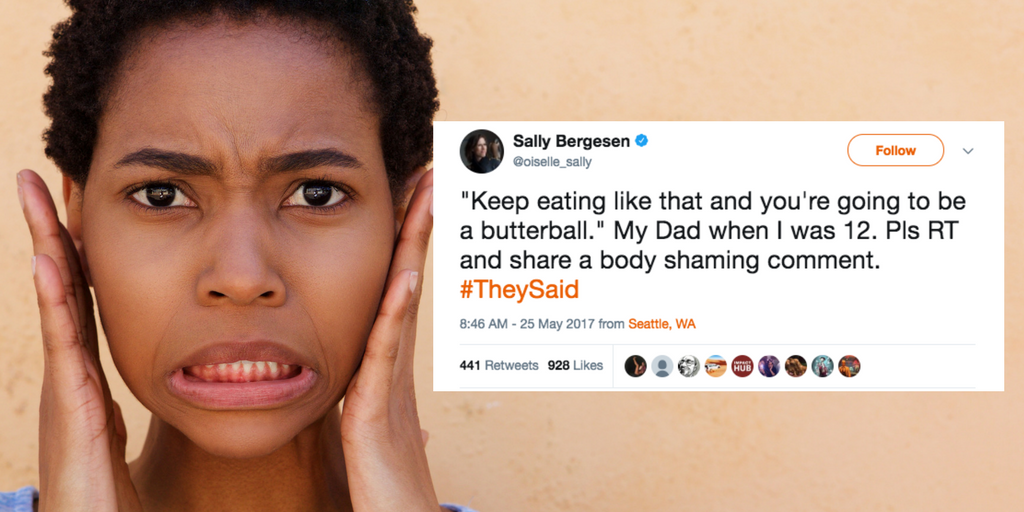 Almost everyone has probably fat-shamed and/or been fat-shamed at some point in their lives. People seem to feel compelled to warn other people about the dangers of being fat.

But are you fat shaming your kids? If so, it’s got to stop. Today.

This is bad enough in public forums like Twitter, on magazine covers, and on movie screens, but when parents fat shame their kids at home, it is deeply troubling because it can lead to serious health complications.

Many of us who have eating disorders can remember being fat-shamed by our parents. Living in a society that tells us bodies must be thin to be “good” is a dangerous environment in which body hate, disordered eating, and eating disorders thrive.

That is why we implore parents to never fat shame their kids. That means:

Sadly, there are plenty of examples of parental body shaming. Just a single hashtag (#theysaid) that trended on Twitter in May 2017 exposes hundreds of damaging comments:

“Honey you need to take these, don’t you want to be pretty?” my mom giving me diet pills when I was 11 @char_cut

“You need to be careful. You’re getting a spare tire. You’ll end up fat” – my Mum. I was 11 years old. @thesophbot

“You have such a pretty face. It’s a pity you’re so fat. No man will ever marry you.” My mother to me circa age 12 @geekspertise

“You should stop eating,” Being slim is the best body type,” “No one likes fat girls” – my mom and my grandma @iqueenwinters

“Are you sure you’re not pregnant? You look 6 months pregnant.” My mom @thebaronessM

“Keep eating like that and you’re going to be a butterball.” My Dad when I was 12. @oiselle_sally

Father looks at pre-teen daughter as she eats an Oreo and says, “Are you sure you want that?” @amyblaszyk

You have a such a pretty face just think if you lost weight. My dad’s favorite shaming thing to say @mellissadufesne

“Why can’t you be skinny like your friend? You don’t want to end up like your mother.” Thanks, dad. @stephmillbetty

“You don’t need that, you’re going to be as big as a house!” My dad when I was 6 @whit_brianne

My dad told me that a 16 inch waist was healthy and that I should try to slim down towards it. AKA the circumference of a cd. @dearjuless

“You’re getting really chunky” – my grandmother, when I hit puberty. @thingjen

“Well well Chubby Checker, someone’s put on some weight” – my grandpa after seeing me in a sleeveless top @mmrach82

My grandmother told my mom, in front of me, if Jen wasn’t so fat, I could buy the same size for her and her cousin. I was 4! @jennydbaker

“You’ve worked harder than anyone here but you’re just too fat to dance in this production.” My dance studio’s creative director @audaciouslyalex

“This is a great exercise for when your thighs start to rub together, emily.” 5th grade gym teacher in front of my class @emmickhue

We understand there is a pervasive belief in our society that weight and obesity are inherently bad and that all people must pursue diets and weight loss to be healthy. This is not true, but it is a strongly-held belief nonetheless.

Because people believe that weight is inherently disgusting and dangerous, they believe that they must save fat people from being fat, and shame is a common “motivational” approach.

When it comes to parents who fat-shame their children, perhaps the parents are trying to help their children be healthier. But even if you believe your intentions are good, your shaming behavior is hurtful and leads to poor health. It must stop.

Using shame as a parenting technique is consistently shown to result in very negative outcomes for children. Children whose parents use shame often suffer from low self-esteem and exhibit mental disorders including anxiety, depression, Obsessive Compulsive Disorder, and eating disorders.

Parental shaming includes public or private comments, behaviors, and reprimands that negatively refer to a child’s behavior, body, or self. Parents who use shame often:

Parents who use shame believe they are motivating their child to be better. It is a form of behavior modification, but it has been proven to be ineffective and destructive. This is because most people, especially children, cannot distinguish between their impulses, their actions, their bodies, and their selves. Shaming condemns the child, making them feel bad about themself as a human being.

Fat shaming is public and pervasive

Beyond federal laws, it is common practice for the following prominent and explicit fat-shaming activities.

Treatments should focus on mental and physical health as the desired outcomes for therapy, and not on weight, McHugh concluded.

What to do if you have fat shamed your kids

If you have been fat shaming your kids, then send yourself some self-compassion. Yes, what you did was unhelpful, but you didn’t know that at the time. The only way you can move forward gracefully and truly help your child is to have compassion for yourself as you own up to your mistake.

Once you are able to realize you have been fat shaming your kids and you understand that it was hurtful without getting defensive or critical of your child, have a conversation in which you openly admit that what you did was wrong and that you are working to change.

Before you begin, here are a few ground rules:

Here is a starting script for apologizing if you have been fat shaming your kids:

“Honey, I’m so sorry. I realize that I’ve made some negative comments about your body, and bodies in general. I understand now that what I was doing is called fat shaming, and I’m going to work really hard not to do it anymore. Please call me out if you hear me fat-shaming you or anyone else ever again. I will do my best to listen non-defensively.”

Why this matters for eating disorder treatment and prevention

As a society and as individual parents, we must recognize that fat shaming your kids can be harmful. Our children who have eating disorders have a multi-layered problem, but the problem at the very top of it all is living in a culture that is obsessed with body weight and dieting. We can do better!

10 thoughts on “Are you fat shaming your kids? You’ve got to stop!”